One of the German traditions for seniors is, that every day during the last week of classes all the seniors dress up according to a different motto each day. As RBC is still located in Germany after all (and also because our secondyears already had a Mottowoche), the last 5 days of school have been a very color- and cheerful time.

(The ones who left for Easter Break) arrived back on campus on Tuesday (18th of April), and classes started on Wednesday.

The topics for our very own, RBC class of 2017-Mottowoche were as follows:

Friday – Twins (pair up and show off together!)

Monday – Swap! (Ever wanted to look like one of your co-years?)

And, believe it or not, this is how my last days of high school classes actually and finally happened!

I have to admit: rather than sitting at my desk for the entire evening in the usual manner of studying for the upcoming events, I felt myself magnetically adhere to my roommates’ closet, searching for clothes that my parents might have worn in their twenties. And really, the next morning the mensa looked like a set from one of those teenage movies like “Mean Girls” and I encountered the probably highest number of chokers, jeans and headphones I have ever seen in one place.

Sure – not the most interesting one for me as a German (especially because we have 25 Germans in one generation here at RBC) but it has its advantages to have a Chinese grandfather and so I just went with Chinese stereotypes, the chopsticks in my hair included. It was also great to see a Russian with a Putin tattoo strolling the corridors of our Karthaus or the Ukrainian girl in a safety suit against radioactivity (not to mention the gender-swapped pair of Trump and Hillary that we so pleased to host on this memorable day).

And here we go. Twin day may not sound all too exciting after all the fancy and very creative ideas on the previous days but let me tell you: it was for sure the most troubling one for me. Because this was the day when I, due to some totally inexplicable reasons, I somehow ended up going as twin sister sluts with my (male!) co-year from Indonesia. Apart from other very enlightening experiences that I made throughout my life as a one-day-slut, the most outstanding one to me was probably how uncomfortable everything about dressing this particular way is.

Well – this was probably for the ones who didn’t have enough of wearing other people’s clothes yet – and provided some fun entertainment in the mensa when everyone tried to guess who was who or when it was once more way too obvious to recognize the person that somebody swapped with due to somebody’s very individual style.

Last day. And I still can’t believe that I will never have to attend high school classes again. But of course today wasn’t only about classes but much more about being higher or lower class or, rather, overcoming such differences (or just the rule of the bourgeois). The mensa was, of course, arranged in a way to separate the classes and equally naturally, the highborn ladies and gentlemen were served whatever meal they wished to enjoy – until the revolutionary forces took over, the king was stabbed and the new (or old) order of a non-hierarchic society was (re)established. 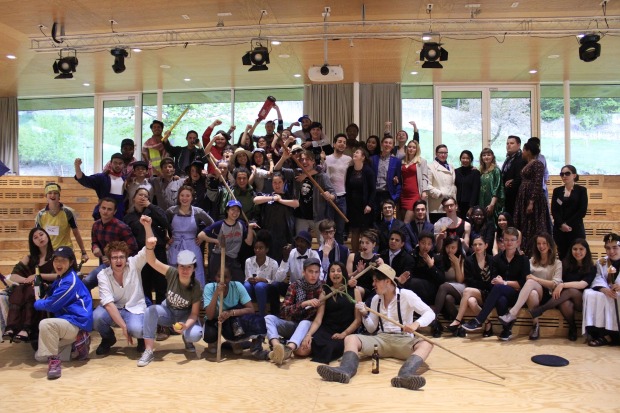 Yes – and this is in fact, how my high school classes have ended. Finally!

This blog is meant to provide a platform for further information and sharing of our events and experiences at UWC RBC!